The Sheepleas and St Martha’s Hill

From the lush fields of the Surrey plain, this walk climbs gently up through beech woods and across meadows into rolling downland, culminating with an ascent to the hilltop church and viewpoint at St Martha’s Hill. 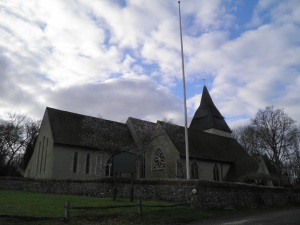 West Horsley Place is a medieval manor house, altered in the sixteenth century, and refaced in the seventeenth and eighteenth centuries. Its early owners seemed rather prone to meeting their ends on Tower Hill, and in keeping with this tradition, it was occupied by the family of Sir Walter Raleigh. His head is buried, alongside the intact body of his son Carew, in the south vault of the church here.

The Sheepleas are 300 acres of downland woodland, classified as an Area of Outstanding Natural Beauty. It was historically part of the West Horsley estate, and was purchased by auction in the 1930s by Surrey County Council to protect it from habitat. The loss of a large number of beech trees in the 1987 hurricane proved to be a blessing in disguise, opening up new areas of meadowland for a greater variety of wild flowers.
This is Albury Organic Vineyard, one of a new wave of vineyards exploiting south-facing chalk slopes in Surrey and Kent. Albury was established in 2009, with 8,500 vines of Champagne varietal grapes – a further 12,500 vines were planted in the following year. The first commercial harvest took place in the autumn of 2011, with the first wine intended to be a still rosé.
This pair of pools are fed by the only major spring along the 17km-long North Down escarpment between the Wey

and Medway valleys. On occasions, you will find the upper pool (Silent Pool) to be dry, but Sherborne Pool always retains water. Sherborne Pool is artificial, dating from the 17th century, with the natural Silent Pool being expanded at the same time. Inevitably, Silent Pool is said to be haunted – by a woodcutter’s daughter who drowned here after being abducted by King John. 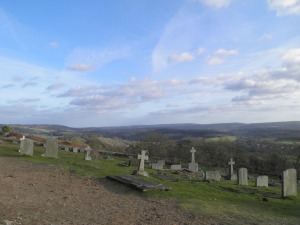 There has been a religious structure on this 175m-high hill since at least the 12th century, which may have begun as a beacon to guide pilgrims en-route to Canterbury. Indeed, it has been suggested that ‘Martha’ is in fact a corruption of ‘Martyr’, with Thomas a Beckett being the martyr in question.

1 Response to The Sheepleas and St Martha’s Hill