A short stroll but a fine one, following the River Mole as it twists through one of the few gaps in the North Downs escarpment. The route takes in vineyards, downland, parkland and water meadows.

Planting of the vineyard on the Denbies estate (named after 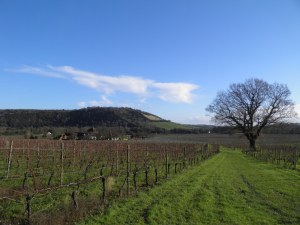 18th century owner John Denby) began in 1986. It now covers 265 acres, more than 10% of the UK’s total vines. The winery, in the large German-style building which also houses the visitor centre, produces white and red varieties, and the vineyard plantings include eight major grape types, including seyval blanc, pinot noir and chardonnay – the vines are labelled with their varieties as you walk through.

Only the west wall and part of the gable of this little flint chapel, built in the 12th or 13th century, serving the village of Westhumble, just down the road. The chapel lasted only around 3 centuries until its desecration in the Dissolution. The ruins were transferred to the National Trust in 1937.

The house you see ahead was built in 1774 by the Locke family, but the parkland of 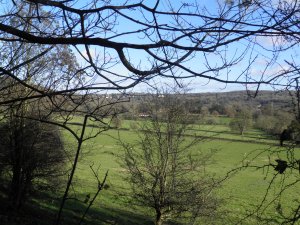 Norbury, which is a mixture of deciduous woodland and agricultural land, has a much longer history, possibly being part of the land of a Mickleham manor mentioned in the Domesday book. In 1931, Norbury Park was the first piece of land ever purchased by Surrey County Council to protect it from development, though today it is managed by Surrey Wildlife Trust and farmed by a number of tenant farmers. The cows you may see grazing the lush riverside meadows below you produce the milk that forms the basis of Norbury Blue cheese, one of the few vegetarian blue cheeses produced in Britain.

The attractive 14-arch bridge you can see here dates from 1783, but the brick piers sit

on much older, medieval foundations – this is a longstanding crossing point of the Mole, quite possibly dating back to Roman times. It was as a river crossing point that the town of Leatherhead grew up, with a large number of inns and hostelries. The Running Horse, on the far bank, dates from 1403 and is reputed to have been stayed in by Elizabeth I, delayed on a journey by floods on the Mole.

7 Responses to The Mole Gap