An immensely varied walk, taking in apple orchards, the Dickensian village of Cobham, wood and heathland, bird-filled marshes and the Thames estuary. 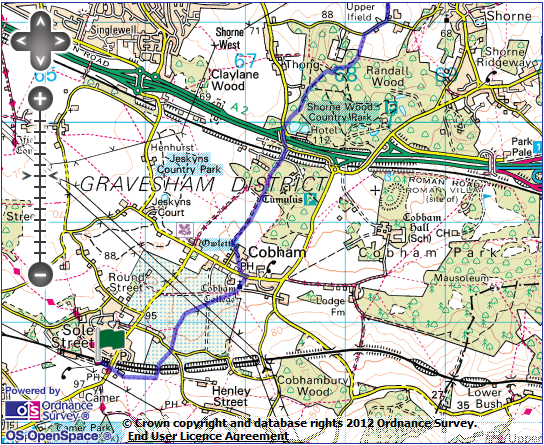 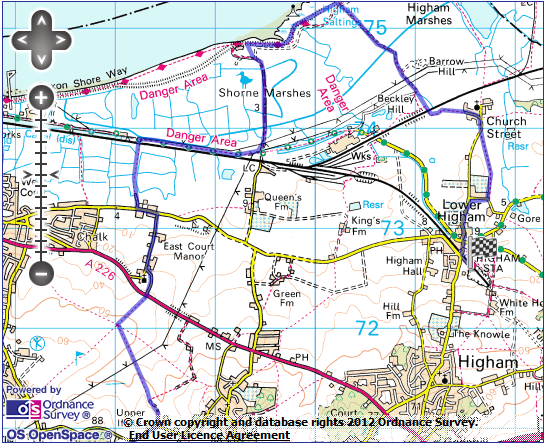 Cobham church dates from the 13th century, and is particularly known for its collection of brasses, some of which are over 600 years old. The attractive college, just beside the

church, was originally built as a training establishment for priests, but ceased to be a  college more than 400 years ago, being converted into almshouses, a role it retains until today. The college can be visited most days (entrance down the path between church and college building). Cobham village is a conservation area, with a large number of historic buildings on its main street. Charles Dickens was a frequent visitor to the village, frequenting the Leather Bottle inn, and setting part of The Pickwick Papers here.

You are now entering a long string of country parks and protected areas, firstly Jeskyns – a varied landscape owned by the Forestry Commission, then Ashenbank Wood, purchased by the Woodland Trust in 1984, and then (on the other side of the A2 and Channel Tunnel Rail Link), Kent County Council’s Shorne Wood Country Park.
St Mary the Virgin’s church, whose tall tower has long been a navigational waymark for shipping on the Thames estuary, serves the village of Chalk (now a suburb of Gravesend), despite being at least a mile distant. A church has existed on this site since the 8th century, with the tower dating from the 15th century.

The Thames & Medway Canal (also known as the Gravesend & Rochester Canal) was an 11 mile waterway built in the early 19th century – this section between Gravesend and Higham opened in 1804, but the tunnel through to Strood on the Medway was not completed until 1824. It was a broad canal, designed to take Thames barges and cutting off the lengthy trip around the Isle of Grain to reach the Medway towns. In particular, it was intended that it would be attractive to boats supplying the naval bases at Chatham, lessening the risk of attack by revolutionary French vessels in the Thames estuary. However, by the time of the canal’s completion, the Napoleonic wars were long over. The canal had limited use carrying agricultural products, but was not a commercial success. The tunnel closed to boats in 1846, the remainder of the canal remaining in use until 1934. An association has owned the canal since the 1970s and restored some parts nearer to Gravesend to water. 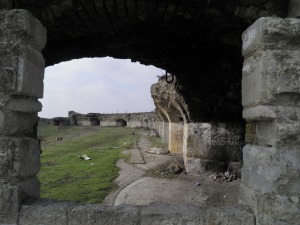 Thames to protect London during the Napoleonic wars – the larger Cliffe Fort is a couple of miles down the river, with Coalhouse Fort opposite it. The fort was expanded in the 1850s, being one of the first fortifications in Britain to adopt a polygonal design. However, the ground was too weak to take the huge fort and its 13 cannon, so the entire installation was rebuilt, in a more modest D-shape. In 1904, it was decided that the fort was too weak to withstand attack and was decommissioned, apart from a brief period during World War II when it served as a gun emplacement. The barracks and administration buildings were demolished post-war, leaving only the outer wall and gun emplacements.

Shorne Marshes was a neglected MoD owned landscape, until purchased by the RSPB in 2000. Work is still underway to restore marshland habitats, rebuilding the drainage systems and using systematic grazing to control plant growth. This has seen a huge expansion in the numbers and range of breeding wading birds (redshank, lapwing and snipe) and wintering ducks in the marshes.
This  single-track line (‘The Hundred of Hoo Railway’) runs across the Hoo Peninsula to the power station and oil refinery at Grain. Originally, the line was an attempt by the London, Chatham and Dover Railway to develop a cross-channel steam packet at Port Victoria and a seaside resort at Allhallow-on-Sea. Both schemes were failures, although Queen Victoria was convinced to use her namesake port as her preferred departure 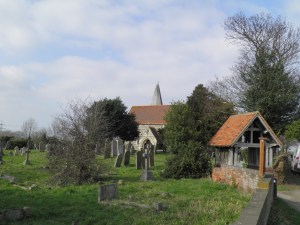 point for the continent. The line closed to passengers in 1961, but still sees very frequent freight services.

Waiting for your train at Higham station, you find yourself in a deep chalk cutting, much wider than the railway and now filled with trees and birds. This is the bed of the Thames and Medway Canal, and the tunnel that the railway emerges from just beyond the platforms was originally built for the canal. Sailing barges had to lower their masts to pass through, and would have been towed through by horses – the towing contractor’s house is now the ticket office.

Halfway through the tunnel is a short open section – this was a passing loop for boats. In 1845, a single-track railway was built to share the tunnel, partially on the towpath, partly cantilevered into the water using a wooden platform. This only lasted a year before the Southeastern Railway bought the tunnel, filled in the canal and laid a double track line. The tunnel was hand-dug through the chalk and was very prone to roof collapses, causing a derailment in 1999. The whole tunnel has now been lined to prevent a recurrence.

2 Responses to Skylarks and shipping