A meander through the lush fields of the Low Weald, before gaining the beech woods and sweeping views of the High Weald, passing Churchill’s country home at Chartwell. 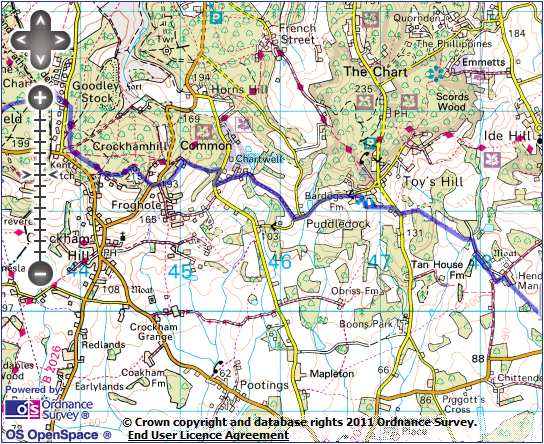 Penshurst station is situated 2 miles away from the village it claims to serve – the hamlet here is called Chiddingstone Causeway. The railway line from Redhill to Tonbridge was part of the first line built to Dover, authorised in 1836 – it follows a remarkable straight route which leads to it missing most of the major settlements en route. So straight, in fact, that it was used as a navigation aid for aircraft heading out of Croydon aerodrome towards the Channel coast.

These scattered coppices which you pass in the early stages of the walk are the remnants of the huge wood which once covered all of the Low Weald – the name comes from an Old English word meaning forest (clearly from the same root as the German Wald). The High Weald hills, less touched by agriculture, have retained much more of their wooded cover.

There has been a farm on this site since at least the 13th century, and the current complex is centered around a 17th century manor house, of which you will get occasional glimpses. This is now an organic farm run by the Commonwork Trust, which also acts as a conference centre and educational centre.

Run by the Kent Wildlife Trust, the visitor centre is housed in an oast house and provides information on the nature reserve which makes up the northern end of Bough Beech Reservoir. The wetland habitats are popular with dragonflies, amphibians and numerous species of birds.

Chartwell was a 16th century farmhouse significantly expanded and modified during the 19th century, when the gardens you can see here were also laid out. It was purchased by the Churchills in 1922 – supposedly Churchill did not like the actual house, but was so taken with the views that he bought it. The house was their main home, except during World War 2, when it was considered too exposed to Nazi-occupied France for safety. After losing the 1945 election, it was clear that Churchill could no longer afford Chartwell’s upkeep and it was purchased by a trust of wellwishers, with the Churchills paying a nominal rent. It passed to the National Trust after Winston’s death.

This attractive area is part of Limpsfield Common, used for grazing, collecting wood and quarrying stone by commoners since the 14th century. It is thought that early experiments with human-carrying kites were carried out here, including by Major Baden-Powell.