A stroll through Hertfordshire’s gentle countryside, crossing the low hills from leafy Harpenden to Redbourn, with its gigantic village green, then wandering down the valley of the Ver, past an idyllic working watermill. The grand finale is St Albans, with its Roman remains and breathtaking abbey.

Important note: The path through Gorhambury Park is a permissive path, and the landowners close it occasionally to prevent it becoming a public right of way. It is generally closed on Saturdays between September and the end of January. As the only alternative route is to walk along the busy A5183, it is probably best to avoid doing this walk on those days. 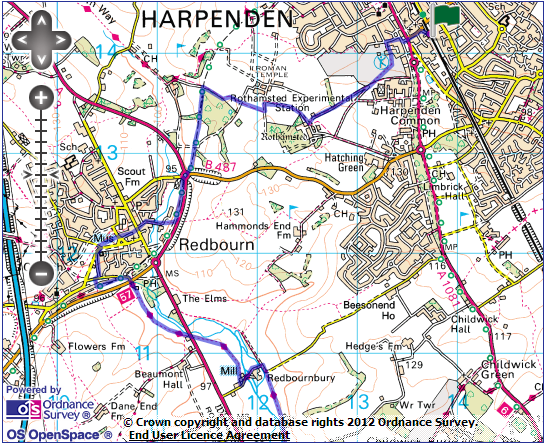 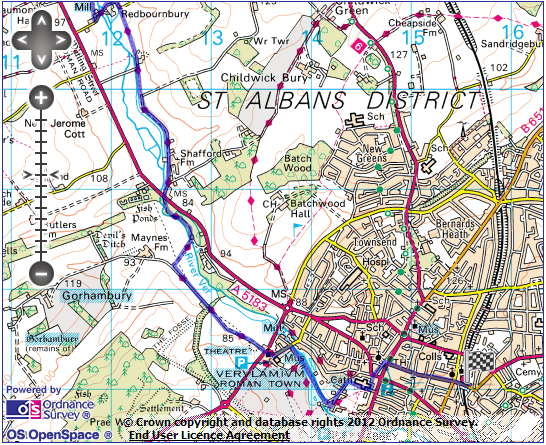 The fields you are cutting through are part of the grounds of Rothamsted Research, formerly the Institute of Arable Crops Research. Founded in 1843, this is one of the oldest agricultural research centres in the world, based in the grounds of 16th century Rothamsted Manor. Following its sale to a family of calvinist brewers from Ghent, fleeing religious persecution, the Manor received a make-over into a Dutch style. The experimental station was founded by the Manor’s owner, and has gradually expanded since. Rothamsted briefly hit the news in 2012, when it began experimental growing of GM crops, leading to a sizeable, but peaceful protest.

As Rothamsted’s first experiment, Broadbalk is thought to be the longest-running agricultural experiment in the world. This field of winter wheat is used to test the impacts on yields of a variety of inorganic fertilisers and manure. The control strip, which has remained completely organic, has been growing continuously since 1843. 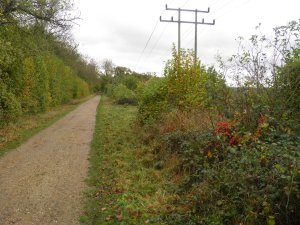 linking Harpenden to Hemel Hempstead. Opened in 1871, one of its original key purposes was carrying the straw plaits that were produced in Hemel Hempstead to the hat-making industry in Luton. Once this industry died out, the line served only a limited purpose and its viability was not helped by the fact that a combination of topography and inter-railway company rivalry meant it never had anything more than a sporadic link to the West Coast Mainline at Hemel Hempstead, and passenger trains terminated at a completely separate station. A connection for freight trains was finally built in 1959, and lasted just six months before the entire line was closed. Today, most of the line forms a superb off-road cycle and walking route. The line was always known locally as ‘The Nicky Line’ and the path retains that name today – however, no-one has come up with a satisfactory explanation for the origin of the name!

The long, straight high street belies its origins – this is Watling Street, a Roman road which took over an earlier trackway, leading from Dover and London to the Welsh borders. Until the motorways arrived, this remained the main route towards Holyhead, and this was the A5, though Redbourn is now by-passed. As a major coaching route, Redbourn developed as a key stopping point – the town became known to travellers as ‘The Street of Inns’, with 25 coaching inns along this high street in the early 19th century  coaching heyday, a number of which still remain in business.

lower 10 miles – Redbournbury was the second highest situated of those mills. There was a mill on this site at the time of the Domesday Book, though much of what you see today dates from a major rebuilding in 1790, and a restoration after a fire in 1987. The mill fell into disuse in the 1950s, the last of the original millers being Ivy Hawkins, ‘the only lady miller in England’. Following restoration, including of the fire-damaged machinery, the mill began grinding organic flour again in 1998 and there has been an on-site bakery since 2005. There is normally a stall selling the huge range of Redbournbury bread here on Saturday mornings (your author can vouch for it being delicious!) and the mill itself is open to visitors on Sundays from 2pm to 5pm.

The fine Palladian house you see up on the hill is the ‘new’ Gorhambury House, dating from 1784, to replace a nearby Elizabethan house, which was itself partly built using bricks from the old Benedictine St Albans abbey following its dissolution. Gorhambury has long been in the hands of 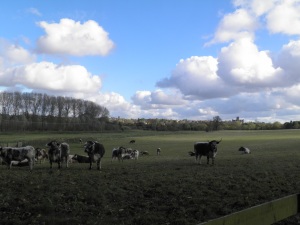 the Grimston family (which included a 17th century speaker of the Commons), who since 1815 have rejoiced in the title of Earls of Verulam.

This is one of the few true Roman theatres in Britain, built around AD 140. Whilst situated on the edge of Roman 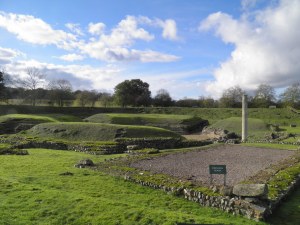 Verulamium, it was the centre of the town’s cultural life, originally as a venue for religious festivals, wrestling and dancing, but later expanding to become more important as a theatre – by around 300AD, the theatre would have had a capacity of around 2000 spectators. Excavated in the mid 19th century, the theatre is the most dramatic above-ground remains of Roman St Albans.

The park lies on the site of Roman Verulamium. Following an attack and sacking by Boudica in AD 61, the town grew substantially, covering 125 acres by the start of the third century. It contained a forum and basilica, surrounded by a ditch and wall, with Roman occupation continuing until around AD 450. Following its abandonment, much of

Verulamium was raided as building stone, including for the original abbey. Verulamium was also the site of the martyrdom of St Alban, the first British martyr saint. Having been converted to Christianity by a priest he was hiding, Alban swapped cloaks with the priest when magistrates came searching for him, leading to his own beheading.

pub in England, though this is inevitably a hotly-disputed claim. The remarkable octagonal shape of the building is believed to come from the building’s original use as a pigeon house. The name comes from its venue for cockfighting, though it only gained it in the 19th century – before then it was simply known as ‘The Round House’.

Whilst known as an abbey, since 1877 this has technically been a cathedral church. The

first abbey on this site was constructed in the late 8th century, but most of this building was destroyed by Danish raids. Much of what we see today, including the layout, dates from after the Norman conquest, including the remarkable tower, the only 11th century ‘great crossing’ tower remaining in Britain. Gradually expanded and rebuilt over the following nine centuries – including major repairs after a 13th century earthquake – the current form of the abbey has the longest nave of any cathedral in England. A large shrine to St Alban, the original reason for a church here, still stands inside the abbey. The fine Abbey Gateway dates from the 16th century, and was the only part of 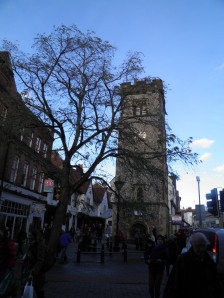 the buildings of the Benedictine monastery to survive the dissolution. Since the dissolution, the gateway’s uses included as a prison and now as part of the private St Albans School.

1 Response to River Ver and Verulamium