Epping Forest and the Epping Uplands

A taste of the northern end of sylvan Epping Forest, followed by a hike through the quiet, little-known fertile uplands of the North Weald, descending to the wildlife-filled reservoirs of the Lee Valley. 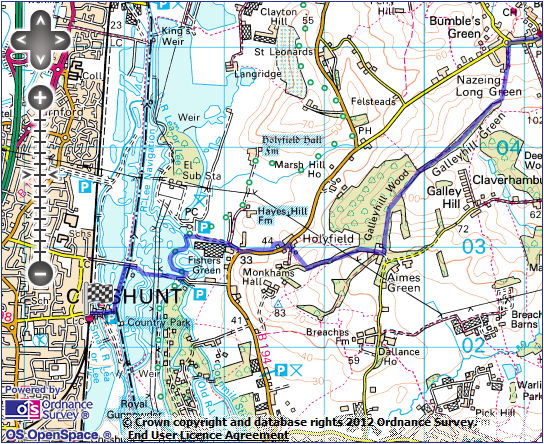 If Epping station doesn’t look like a traditional Tube station, that is because it began its life as a stop on the mainline Eastern Railways route from Stratford to Ongar, opened in 1865. The line was not electrified and transferred to Underground operation until 1949, with the existing stations retained. Epping became the terminus in 1994, when London Underground closed the little-used line beyond to Ongar, stating it would be cheaper to buy all its users a Rolls Royce than to continue operation. Needless to say, no Rolls Royces were provided.

Bell Common is an attractive conservation area, no longer managed as a common, but being taken over by scrubs and trees. It was historically called Beacon Common and it has been suggested that the settlement here was originally established to maintain a warning beacon.

Forest Gate Inn refers to the toll gate that once stood nearby on the High Road, an 18th century turnpike cutting straight through the forest to link Epping with London.
Epping Forest will need no introduction to many Londoners, it having been a popular

recreation area on the edge of the conurbation for well over a century. Almost 19km long on a north-south axis, this ancient woodland was a royal hunting forest from the 12th century, until being placed in the hands of the Corporation of London in 1878 to maintain for public access and enjoyment, preventing enclosure and halting the shrinkage of the forest. 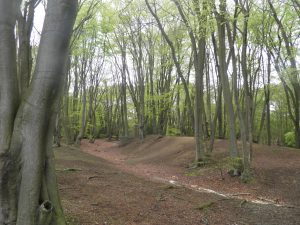 Ambresbury Banks represent the remains of an iron age hill fort, the single ring of banks enclosing an area of 11 acres. It is believed to have been inhabited from some point in the 8th century BC until around 42AD, and is thought to have been part of a line of forts delineating the terriories of the Trinovantes and Catuvellauni tribes. Legend has it that this was the site of Boudica’s last stand against the Romans, but there is no evidence to support this.

Copped Hall is a ruined 18th century mansion, set in a huge area of parkland now split in two by the M25 orbital motorway. The Georgian mansion, which you will glimpse later, replaced a 16th century house, visited on at least one occasion by Elizabeth I. The house was gutted by fire in 1917, probably caused by discarded cigarettes when the inhabitants gathered on the roof to watch a Zeppelin being destroyed over Grays. Like Epping Forest, the house and park are now in the hands of the Corporation of London, and a trust is slowly rebuilding the Hall.

Nazeingwood Common is a large bowl-shaped plateau, originally part of the no longer existing (except in the name of a London borough) Waltham Forest. Cleared for grazing in the 13th century, it was ploughed up for crops during World War II and remains as arable land today.

Coal tax posts mark the point at which the historic duty on coal being brought into the City of London became payable to the Corporation. There are around 210 markers – with the cast iron post as seen here being the most common type – placed in an irregular ring between 12 and 18 miles form the centre of the City, even on the most obscure byways (as here!). When first levied in 1666, the duties were meant to support the rebuilding – particularly of St Paul’s Cathedral – after the Great Fire. They were subsequently used for more general infrastructure projects until they were abolished with the formation of the London County Council in 1889.

The Lee Valley Park is a 26 mile long linear park stretching from Hackney to Hoddesdon, around 5 miles north of this point. This covers not just the banks of the river itself, but also its numerous overflow channels (such as Horsemill Stream), and the large number of lakes and reservoirs. The Lee Valley Regional Park Authority, which maintains the park, is funded by – amongst other things – a small precept on the council tax bill of every London borough, so if you are London resident, you have helped support the landscape you see here! 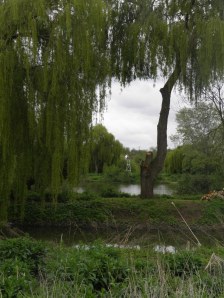 The Lee here is a canalised river, with navigation possible from the Thames at Bow right up to Hertford, around 10 miles upstream of here. Efforts to improve the navigability of the Lee began as early as the 15th century, with improvements such as locks and cut-offs continuing to be added well into the 19th century. As late as the 1950s, horse-drawn commercial barges were operating right through to Hertford, but since the 1980s there has been little if any commercial traffic.

4 Responses to Epping Forest and the Epping Uplands