The high-speed line puts this unique corner of Sussex within easy reach of London. This walk explores some of its remarkable landscapes – hills, orchards, salt marsh and reed bed – as well as some of its rich history, both shaped by a retreating sea.

Three Oaks station is an odd survivor – a tiny halt hidden in the trees, used by fewer

than 20 people every day. For 50 years after opening, trains on this line ran non-stop between Winchelsea and the outskirts of Hastings. Faced with road competition, the South Eastern Railway launched a steam railmotor (an unwieldy precursor of today’s multiple unit trains) service and opened three halts in 1907 to serve the small rural communities. Amazingly, two of them survived (the other is Doleham, which serves nothing of any consequence and has a very limited service) a decade of railway retrenchment. A recent heavy cut to Three Oaks and Winchelsea’s services were met with a massive local outcry and Southern relented, reinstating a train every two hours.

Icklesham village is much expanded by modern housing, but you skirt most of this. Icklesham’s roots are much older, first mentioned in a land charter signed by Offa (or Mercia, and Dyke fame) in 772AD. It quickly became a highly strategic location, high above the flat expanse of the Brede levels and was an early target for Norman invaders in 1066, and plans were made for its

evacuation in the event of a Napoleonic invasion.

The Channel from Icklesham windmill

constructed at Pett, over a mile south of here, before being transferred to its current site in 1790 – such perambulations were relatively common for lightly build post mills. Its design, with a roof mounted fantail (the smaller sail at the rear) is relatively unusual, and only two surviving mills in Britain have this feature. The mill ceased functioning in 1920, but has since been cosmetically restored, now serving as a recording studio for Sir Paul McCartney.

These scrapes – artificial lakes created from arable land, but which effectively recreate the shallow waters that would have dominated low-lying parts of this area before the sea retreated. The reserve is managed by the Wetland Trust, and bird species often seen around the scrapes include bearded tits, water rails, barn owls

and harriers, as well as more common waterfowl. Herds of farmed deer can often be seen on the slopes on the opposite side of the scrapes.

The Royal Military Canal is a unique watercourse, 28 miles in length, running from near

Folkestone to near Hastings and cutting off Romney Marsh and the Dungeness peninsula from the ‘mainland’. Built from 1804 onwards, its primary purpose was defensive, when the threat of Napoleonic invasion led to a reconsideration of the historic view that the Marsh could be defended by flooding it. Planned to be 19m wide, the canal was to provide a tricky obstacle for an invading army landing on the Sussex/Kent border, as would the parapet built from the excavated soil. A side effect, which brought off local landowners, was the improved drainage the canal would provide in the area. The canal was completed in 1809, three years after the end of any serious French invasion threat after the defeat at Trafalgar. Having cost the equivalent of £178m and immediately becoming a white elephant, the canal was a laughing stock and a government embarrassment. In his Rural Rides, William Cobbett noted “Here is a canal made for the length of thirty miles to keep out the French; for those armies who had so often crossed the Rhine and the Danube were to be kept back by a canal thirty feet wide at most!” Subsequent attempts to justify the canal by using it for transport proved lacklustre and were doomed by the opening of the Ashford-Hastings railway in 1851. Commercial navigation ceased by 1909. Nevertheless, the canal was requisitioned by the War Office in 1939 and a line of defensive pill boxes were built along it. Today, it continues to serve as a drainage system for the marsh, and stretches are designated as Sites of Special Scientific Interest. 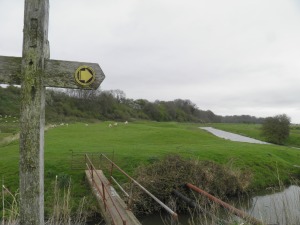 geography of this area has changed in recent (by the standards of geographical change!) times. In Saxon times, this was the coastline – there is a line of these inland cliffs stretching north from here along the inland edge of Romney Marsh – you may have seen some from the train either side of Rye. Over the past 700 or so years, the process of longshore drift caused huge deposits of silt to move the coastline in places far from its previous course (here it is only about a mile away), taking with it much of the prosperity of towns like Winchelsea and Rye, who lost their harbours. Though there was one positive side effect – after 1448, the French were no longer able to undertake their periodic raiding of Winchelsea, as the water was now too shallow for their boats!

later), it was constructed with the kind of defences befitting a town that frequently came under attack from French raiding parties. The town was completely surrounded by a ring of walls or ditches, with four main gates leading in. The New Gate, as the name suggests, was the last to be completed, in 1330, and guarded what was then the main road to the south, and would have had a double pair of gates. With the aid of some treacherous locals, French and Castillian forces were, at least in legend, able to enter the town through New Gate in 1380. The town ditch, of which a clear section survives next to the gate, ran around the western, southern and eastern edges of the hill on which Winchelsea stands.

The Winchelsea that we see today is a planned town – not the earliest such town in England, but probably the best preserved in terms of layout. The original Winchelsea (‘Old Winchelsea’) was a prosperous port town, situated around four miles to the east, in what is now Rye Bay. A prolonged period of turbulent weather from the 1230s to the 1280s accelerated longshore drift, weakened the shingle beach on which the town was built and damaged sea defences. For Old

Winchelsea, this culminated in a ferocious storm on 1 October 1250, when ‘a great tempest of wind’ caused two tides to apparently merge, without an ebb in between, permanently destroying much of the shingle beach and taking much of Old Winchelsea with it. Another great storm in 1287 finished off all that remained. In 1281, Edward I ordered a new town, built on a planned grid pattern, to be built on Iham Hill, granting it Old Winchelsea’s status as one of the Cinque Ports. Complete with a tidal harbour on the River Brede, the new Winchelsea quickly prospered, particularly from the cross-Channel wine trade (many of the houses retain remarkable wine cellars as a 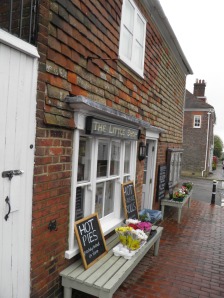 legacy, which can sometimes be visited). All too quickly, however, the prosperity ended, as from the mid 14th century onwards, a combination of French raids, the decline of the wine trade during the Hundred Years War, and the steady silting up of the harbour, meant that Winchelsea was supplanted by other south coast ports, such as Chichester. The town declined and shrank – by 1561, there were no ships based in the town at all. A brief economic revival was spearheaded in the 18th century by linen-producing Hugenot refugees, the constant humidity of the wine cellars proving perfect for the delicate fibres – this led to the building of many of the fine houses still extant today, albeit on the medieval street plan. Winchelsea became famous as a rotten borough, sending two MPs to Westminster even when it was reduced to a few hovels at the nadir of its decline. A remnant of this remains in the form of Winchelsea’s mayor and corporation (it is the smallest place in Britain to have such accouterments) – who have no government function, but also no democratic legitimacy. The mayor is elected by the freemen of the corporation, with the freemen appointing new freemen in a closed circle. The church of St Thomas’ – originally the largest of three churches in the planned town – was the size of a small cathedral when constructed, with a tall tower and spire visible far out to sea. Today, only the chancel remains intact, along with the ruined transepts on either side, but these still give a good impression of the immense size of the original building.

Much more imposing than New Gate, Strand Gate was built in 1300, to protect the road from the harbour, which stood at the foot of Strand Hill. It would have housed a pair of portcullises and a pair of gates, what remains today being at least a third shorter than originally built.

Camber Castle now stands as a hulking, low bulwark, alone amongst the marshes inhabited only by sheep and hares. Another testament to the changing coastline, when originally built in 1539 by Henry VIII, it would have stood on a headland in a strategic position to defend the naval and mercantile anchorages at Rye. Camber is one of a series of what were known as ‘device forts’, artillery fortifications to protect against invasion during England’s political isolation after Henry’s divorce of Catherine of Aragon. The taller, central tower predates the main castle by 25

years, with the four outer towers added to create the clover-like design. As the shorline receded, the central tower was raised to increase the range of its cannon, but by 1637, less than a hundred years after construction began, silting of Rye harbour rendered the castle obsolete.

Castle Water, a freshwater lagoon, is part of the large Rye Harbour Nature Reserve, an important part of the Dungeness, Romney Marsh and Rye Bay SSSI, managed since 2011 by the Sussex Wildlife Trust. The 465 hectares contains a huge range of habitats, including saltmarsh, reclaimed marsh, shingle ridges, sand and woodland. Over 3,300 species of flora and fauna have been recorded on the reserve.

The history and attractions of Rye are too complex to go into at length here. Like Winchelsea it is one of the Cinque Ports and occupies an important strategic location, at

Rye, across the Rother

the point where the sandstone of the High Weald ridge that runs through Kent and Sussex reaches the sea – the hill on which the old town stands is the final point of this. When Rye developed as a port, it stood at the head of an embayment of the Channel, surrounded on three sides by water. The great storms of the 13th century cut Rye off from the sea, leaving only the River Rother as an outlet for shipping, which in turn gradually silted up. The story of much of Rye’s history was a conflict between the sea-going economy and agricultural interests, whose reclamation of the fertile lands of the Romney marsh for sheep grazing reduced the river’s flow still more. As legitimate trade declined, Rye became increasingly dependent on smuggling, including of wool, as a means to make a living. Much of Rye’s built heritage remains on its hilltop site, including cobbled streets, fortifications, gateways and ancient inns, with superb views over the surrounding countryside.