Climbing from the lush fields of the Low Weald to the astonishing landscape of Ashdown Forest – a former hunting ground – with vast, high expanses of heather and heathland, this walk takes in the landscape that inspired Winnie-the-Pooh, sweeping views and rich woodland. 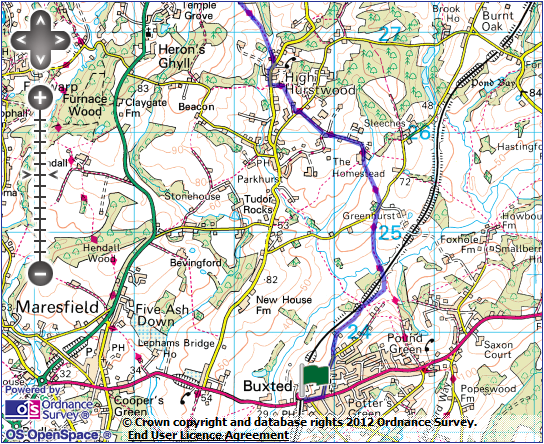 High Hurstwood’s church, dating from the 1870s, is a highly unusual design, with its half-timbered clock tower built on top of the porch, almost like a dovecote, and with a circular apse.
The Ashdown Forest is a hunting forest dating back to a little after the Norman conquest – ‘forest’ in this sense did not necessarily imply trees, but a hunting reserve – amongst other royalty and nobility,

Henry VIII is known to have hunted here. The Ashdown Forest, which rises up to 223m contains a wide range of landscapes, including woodland, and high heather commons. From the 13th century onwards, a 23-mile long fence, or pale, was built around the Forest, though the rights of commoners to graze and collect firewood was retained. Surprising as it may seem today, the Forest also had a major role in British industrial history, with the first blast furnace in the country opening at Newbridge in 1492, using the rich iron deposits in the area. If the landscape looks familiar, it may be a memory of E.H.Shephard’s illustrations of Winnie-the-Pooh, based on this landscape. The author, A.A.Milne, lived nearby and took his son Christopher Robin walking in the forest. You may well encounter deer, but bears, tigers and kangaroos are a little scarcer.

The Five Hundred Acre wood is, of course, the Hundred Acre Wood in Winnie-the-Pooh. It is a fine mix of beech, silver birch, holly and sweet chestnut. It is part of the majority of Ashdown Forest which was sold into private hands at the end of the seventeenth century.

Eridge station – smartly restored – is a shadow of its former busy self, with routes branching off to Tunbridge Wells, East Grinstead and to Heathfield. The remaining line to Uckfield was formerly a through route from London to Lewes, but was severed in 1969. The line to Tunbridge Wells remained open until 1983, being subsequently re-opened by the Spa Valley Railway heritage outfit, with services returning to Eridge in 2011. Eridge station serves the distant hamlet of Eridge Green and little else – when it opened, even that did not exist, and the station took it’s name from the stately home at Eridge Park, 2 miles to the north east. 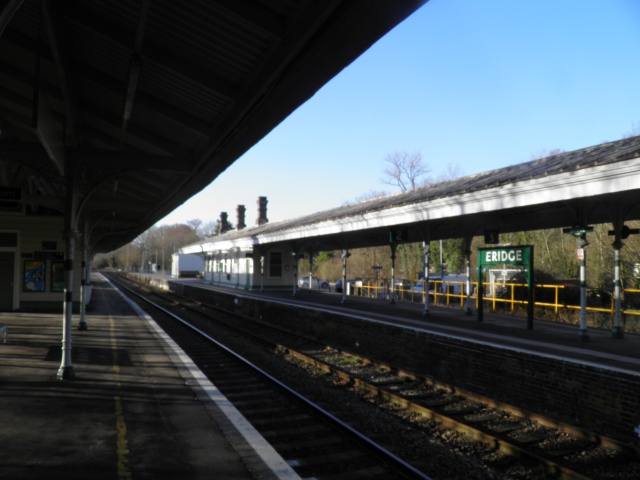