The Hellfire Club and One Nation

Cris-crossing a valley between Chiltern heights that are sometimes bleak and sometimes well-wooded, this easy but rewarding walk links pretty Bradenham village, West Wycombe Hill with its artefacts of the Hellfire Club and Benjamin Disraeli’s mansion at Hughenden.

Confusingly, the village of Saunderton, or at least the historic village, is not only some

three miles from the station, but is also far closer to the next stop up the line at Princes Risborough. There seems to be some reluctance on the part of Ordnance Survey to name the collection of houses around this station, but it is also known locally as Saunderton. The station, along with the rest of this line, opened relatively late in 1901, and briefly shot to fame 12 years later when suffragettes burned down the main station building, leaving signs saying “Burning to Get The Vote” on the platform.

There has been a manor at Bradenham since the 13th century, with the current fine red brick manor house being built in the 17th century. By the 19th century, this was the home of a merchant named Isaac D’Israeli, whose son Benjamin, twice prime minister of Britain, was born here in 1804 and lived here for the early years of his life. His father is buried here in St Botolph’s church. Since 1956, the entire village of Bradenham has been in the ownership of the National Trust.

St Lawrence’s is the parish church for the village of West Wycombe, below in the valley floor. There is also a church in the village itself, which was often known as the ‘winter church’, whilst the hilltop site was the ‘summer church’. In its current form, the grade 1 listed church dates from 1761, but this has been a religious location since at least the 7th century AD. The most remarkable feature of the church is, of course, the huge gold ball, 8 foot in diameter, on the tower. Built of a wooden frame and covered in gold leaf, it is large enough to contain seating for six people. Sadly, there is absolutely no evidence for the widely held belief that members of the Hellfire Club, the high society organisation, which was believed to enable its members – including senior politicians – to partake of ‘immoral acts’, founded by local aristocrat Francis Dashwood in 1719.

This is the Dashwood mausoleum, built in 1765 by Sir Francis Dashwood, of Portland stone and flint, set on the site of an iron age hill fort. The urns around the interior walls of this huge, hexagonal construction house the ashes of members of the Dashwood family, of West Wycombe House.

The Hellfire Caves are a network of manmade caves, extending up to a quarter of a mile underground. Excavated between 1748 and 1752 by Francis Dashwood (who else?), they were originally part of a work creation scheme for

local people, to provide chalk to surface the road from West Wycombe to High Wycombe. Subsequently, they became used as a meeting place for the Hellfire Club throughout the 1750s and early 1760s, following a practice described by Horace Walpole as ‘rigorously pagan’. The caves would have therefore been visited by many of the leading political figures of the day. It is unclear whether Benjamin Franklin, one of the United States’ founding fathers, was actually a member of the club, but he certainly visited the caves as a friend of Francis Dashwood. The club began to decline from 1762, when Dashwood had a brief tenure as chancellor of the exchequer, before resigning after his increase in duty on cider caused near riots. Various exposes of the Club, along with deaths of many of its members, led to it being defunct by 1766. The caves sat empty until the 1940s, when another Francis Dashwood renovated them and opened them as a tourist attraction in order to fund the renovation of West Wycombe Park.

The huge redbrick pile of Hughenden Manor is a Victorian remodeling of an apparently unassuming 17th century house, though there has been a manor at Hughenden since Norman times. Benjamin Disraeli purchased the house in 1848, at least in part as a means to further his political ambitions. He had been a member of parliament since 1837, originally for Maidstone and later for Shrewsbury, but by the late 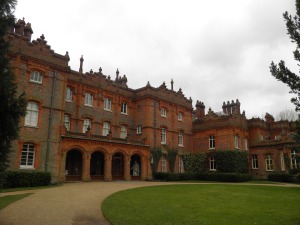 1840s he was beginning to consider his prospects as a future leader of the Conservative party. It was unthinkable in the then Tory party that their leader should not represent a ‘county’ seat, and to do so it was necessary to be a landowner. Disraeli therefore secured a loan to buy Hughenden from an ally and brother of a former leader of the party, Lord Henry Bentink,   enabling him to stand and be elected for his birth county of Buckinghamshire. Achieving the leadership took somewhat longer than he expected, and the only offices Disraeli held during the 1850s were two short spells as chancellor under Lord Derby. In 1862, he had Hughenden remodeled to the form we see today, in a hybrid baronial form of Gothic architecture. Disraeli eventually rose to the party leadership and, briefly, the premiership, in 1868, with a longer spell in office from 1874 to 1880. Hughenden remained his home until his death in 1881, and he is buried with his wife in St Michael and All Angels church below the house, with a memorial erected by Queen Victoria inside the church. During World War 2, Hughenden was a secret intelligence base, codenamed ‘Hillside’, used for the analysis of aerial photographs of Germany and preparing maps for bombing raids, including the Dambusters. The house and grounds were passed to the National Trust in 1947.