This lovely walk across water meadows, deer park and woodland is stuffed full of history – Runnymede, site of Magna Carta’s signing, Windsor, centuries-old seat of monarchy, and even a short visit to the USA. 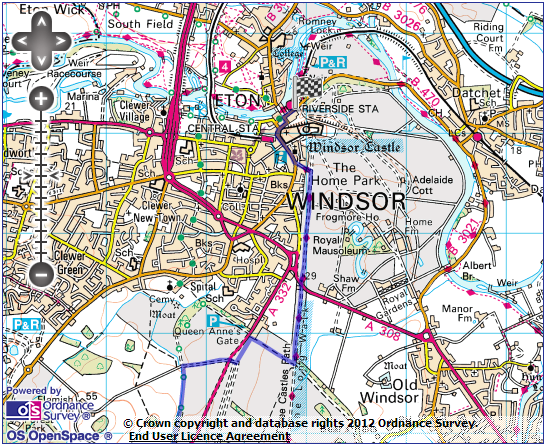 Runnymede, in the ownership of the National Trust since 1929, comprising 188 acres of Thames floodplain, mainly comprised of alluvial pasture interspersed with dotted woodland. There is evidence of a  long history of Runnymede being associated with political activity – the name probably comes from the Anglo-Saxon ‘runieg’ meaning ‘regular meeting’. The witenagemot of the Anglo-Saxon kings – a frequent, often open-air meeting, which was the precursor of the modern parliament, was held at Runnymede on several occasions. Whilst there is no certainty that Runnymede was the location of the sealing of Magna Carta in 1215, it is certainly

the most likely location. 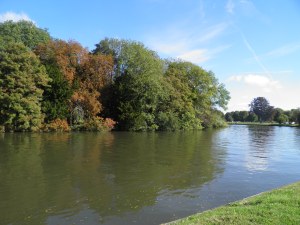 The Memorial, whose tower can be seen among the trees on the summit of Cooper’s Hill, follows a design by Sir Edward Maufe and comprises a shrine and colonnade. Opened by the Queen in 1953, it commemorates the 20,000 UK-based airmen and women who died during World War II and who have no known graves.

Despite popular theory, there is absolutely no evidence that the island is where the charter was signed, rather than on Runnymede meadows, but this did not stop a 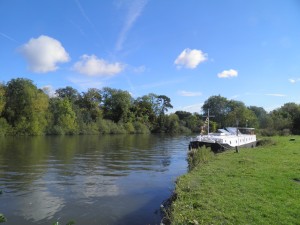 commemorative cottage being built on the island which contains a stone on which Magna Carta is said to have been signed. It is more certain, however, that the island was the site of a meeting two years later, in 1217, between King John and Louis of France, pretender to the English throne, where a peace deal between the two was forged – this perhaps adds some weight to the Magna Carta theory! As Jerome K Jerome puts it in his comic novel Three Men in a Boat, “As far as my own personal opinion goes, however, I am inclined to give weight to the popular island theory.  Certainly, had I been one of the Barons, at the time, I should have strongly urged upon my comrades the advisability of our getting such a slippery customer as King John on to the island, where there was less chance of surprises and tricks.” The island is now linked to the shore via a bridge to the north bank of the Thames.

This domed classical temple was constructed in 1957, on land leased from the Magna Carta Trust to the American Bar Association, paid for by donations from 9,000 American lawyers. Like the Airforce memorial, this too was to a design by Sir Edward Maufe. Under the dome is a pillar of English granite, inscribed with the words ‘To commemorate Magna Carta, symbol of freedom under law’.

Following the assassination of President John F Kennedy in 1963, the decision was made to gift the United States with an acre of ground at Runnymede as a memorial – whilst ownership of the land was transferred to the US, sovereignty remains in the hands of the UK, so there’s no need to learn about American right of way law before entering! The memorial was dedicated two years after Kennedy’s death by the Queen and Jacqueline Kennedy. From Runnymede meadows, visitors ascend a flight of 50 steps through the woodland, designed to symbolise a pilgrimage, to reach a Portland stone tablet, inscribed with the famous words from Kennedy’s inaugural address (“Pay any price, bear any burden, meet any hardship, support any friend or oppose any foe, in order to assure the survival and success of liberty.”)

Windsor Great Park comprises 5,000 acres of varied landscapes, including classical parkland, a ‘wild’ managed deer park, gardens and farmland. The park was first established when Windsor became a royal residence in the 11th century, and gradually grew as a resource to supply Windsor with wood, meat and fish. Over time, the park’s utility for supplying the monarchy decreased and it became more of a recreational hunting ground. It remained under direct royal ownership (save for a brief privatisation by Oliver Cromwell) until the late 18th century, when George III transferred management of royal lands to parliament. It is now managed by the Crown Estate. Having been used as

the road cycling venue for the 1948 Olympic games, the park was gradually opened to the public during the 1950s. The first grounds you walk through are those of the Royal Lodge, built as a Deputy Ranger’s House, before becoming a residence for the Prince Regent in 1812. Following a renovation in the 1930s, it is now the official residence of the Duke of York.

Known as ‘The Copper Horse’, the dramatic equestrian statue of George III on the top of Snow Hill was commissioned by his son, George IV. The Latin inscription translates as ‘The best of fathers’, despite the relationship between the two Georges (like most Hannovrian father-son relationships) being utterly disastrous. The statue marks the southern end of the Long Walk, a two-and-a-half mile long avenue which runs dead straight to the George IV gateway at Windsor Castle, originally laid out and planted by Charles II and William of Orange. Its original double row of elms was chopped down in World War II.

Queen Anne’s Ride is a three mile long avenue, leading south west from Windsor towards Ascot. Unlike the Long Walk, it comprises only a single row of trees on either side. The Ride was restored 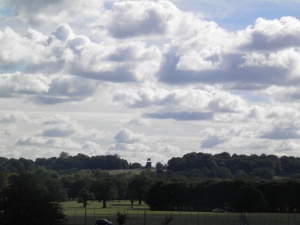 Looking back to the Copper Horse

Windsor Castle is the longest continually-occupied royal palace in Europe, having been used by monarchs since Henry I in the early 12th century. There has been a castle on this site since the time of the Norman conquest, when William I constructed a fort here as part of a defensive ring of motte and bailey castles around London. It had the specific role of guarding a strategically important point on the Thames, with the castle sited on a commanding bluff above a curve in the river. After withstanding a long siege during the First Baron’s War in the 13th century, the castle was slowly transformed into a luxurious royal residence, containing architecture from a wide range of periods. Charles II rebuilt much of the castle in baroque style, followed by further major renovations and rebuilding by George III and IV during the early 19th century. From Victoria onwards, Windsor became a centre for formal entertainment by the royal family, and is still frequently used for receiving foreign heads of state. The castle survived a major fire in 1992.

Whilst Windsor has had a guildhall from at least the 14th century, the current building, supported on columns to provide sheltered room underneath for corn markets, dates from the late 17th century, having been completed by Sir Christopher Wren following the death of the original architect. It was the centre of administration for Windsor, and is still the base for the Royal Borough of Windsor & Maidenhead’s ceremonial events, as well as the borough museum. In 2005, Prince Charles and Camilla Parker Bowles married at the Guildhall.

The grand entrance and curved roof of what was Central station demonstrate the historic importance of the station as a royal arrival point at Windsor – the building you see today dates from a complete reconstruction of the station by the Great Western Railway for Queen Victoria’ Diamond Jubilee. The railway portion of the station has gradually been reduced – for a while most of the site functioned as a Madame Tussauds re-creation of the station in its heyday, including a replica steam locomotive which is still in place. Most of the station is now a retail centre, with a short single platform at the far end for shuttle services to Slough.