A meander through the quiet valleys and nature reserves of the Berkshire/Hampshire border, quieter now they no longer reverberate to USAF planes. As a finale, the route climbs to the high, windswept, spectacular reclaimed site of Greenham Common airbase. 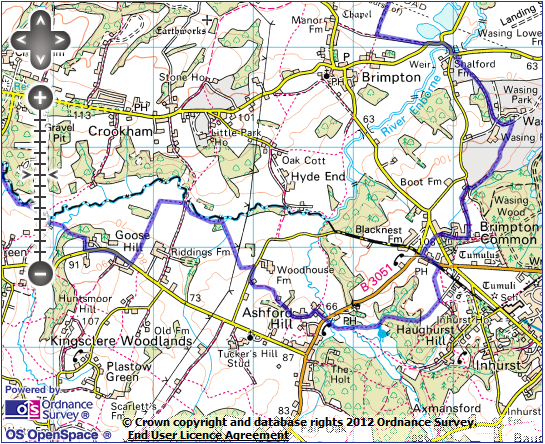 Contrary to the name, Midgham station – a halt on the main line to south west England –

actually sits in the village of Woolhampton. Midgham itself is a hamlet around two kilometers up the hill from here. On opening in 1848, the station was called Woolhampton, the renaming in 1873 due to (according to legend, at least) to avoid confusion with Wolverhampton. Woolhampton has long served a transport role, once being famous for its coaching inns on the Bath road.

This group of lakes – known as the Woolhampton lakes – are former gravel pits, now flooded both for fishing, and to provide a habitat for a wide range of waterfowl. They have become a popular stopping off point for migrant species. There is a fine view across the lakes to the spire of Brimpton church.

The little hamlet of Wasing is built around Wasing House, a small mansion built in 1770 by a London nautical publisher named John Mount, and has been in the hands of the same family ever since. The House was rebuilt after a major fire in 1945. The little chapel of St Nicholas forms the parish church for the village.

The Pineapple inn sits at the heart of the scattered village of Brimpton Common, and is over 900 years old – warranting a mention in the Doomsday Book. The pub’s name is probably less exotic than it sounds – a ‘pineapple’ was a local name for a pine cone! Brimpton Common’s claims to fame include being the birthplace of Ruth Ellis, the last woman to be hung in England; and for having been the holiday retreat of Aneurin Bevan and Jennie Lee.

Ashford Hill is a 23 hectare reserve of lowland grassland, an increasingly threatened

ecosystem. The grassland here is managed through grazing and hay-cutting. The valley floor hosts an important range of habitats for wildflowers (including water violet and stichwort) and butterflies (including purple emperors).

You are now on Greenham Common, a huge area of grazed common land, reclaiming

the site of the air base, which became famous during the 1980s as a base for US nuclear cruise missiles, and the permanent peace camp which accompanied them. The airfield on this site was opened by the RAF in 1942, and turned over to the USAF a year later. As the Cold War heated up following the Berlin blockade, work was undertaken to allow Greenham to be used for modern jet bombers, including creating the 3km-long runway, whose course you can still faintly see. In response to the increased range and accuracy of Soviet Missiles, it was announced in 1980 that the US would base 160 nuclear missiles in Britain, including 96 at Greenham. The first delivery of missiles were flown in during 1983, but their presence was relatively short-lived. The Intermediate-Range Nuclear Forces Treaty, signed between the US and USSR in 1987, agreed the removal of missiles from Greenham, with the final warheads being removed in 1991. The base closed in 1993  and the runways and taxiways returned to nature, 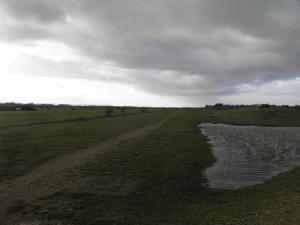 whilst the base’s buildings became a business park – visible in the far distance from here. The bunkers for the nuclear missiles were also at the far end of the runway.

Whilst today forming part of the Kennet and Avon canal, this stretch of waterway in fact significantly pre-dates it. This is the Kennet Navigation, completed in 1723, running between Reading and Newbury – parts of this are canalised sections of river, others – as here – are artificial channels cutting off curves and weirs in the river. Work on the cross-country Kennet and Avon canal, linking Newbury with the Avon at Bath, began in 1797 and was completed in 1810, transforming this into a major east-west trade route. Post-war, much of the canal fell into disuse, gradually being restored in stages. The Reading-Newbury section was re-opened in 1990. 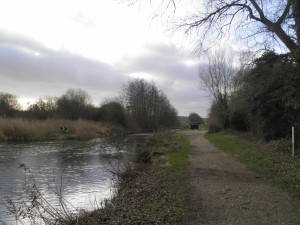 Monkey Marsh Lock is notable for being turf-sided, rather than the usual brick walls, and is one of only two such locks operational on the Kennet & Avon – due to this it is a listed monument. A ceremony to mark the re-opening of this section of canal was held here in 1990.