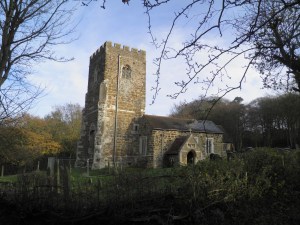 The parish church of All Saints dates on this site from the 12th century, though most of what you see is a 15th century re-modelling, and 18th century restoration. The well-known hymn tune Bow Brickhill was composed in honour of this idyllic little church by Sydney Nicholson, and was first performed here in 1923. 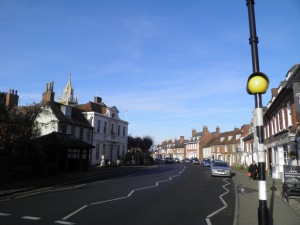 Woburn high street houses a fine collection of Georgian buildings, dating back to a rebuilding of the village after a fire in 1724. It grew in importance as a horse-changing location on the stagecoach network, with 27 inns and the first 24-hour post office outside London. The lack of a connection to the rail network led to a rapid decline in importance and population after the mid-19th century.

You are now in Woburn Abbey’s 3000 acre deer park, one of the largest such parks in Europe. At pretty much any time of year you are likely to see some of the nine species of deer that inhabit the park. Its most famous inhabitants are the Pere Davids deer, saved from extinction when the 11th Duke of Bedford brought the last surviving specimens from China in the 1880s. 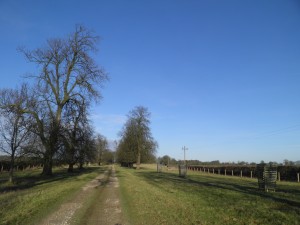 This long drive leads eventually to the hamlet of Battlesden, specifically to the site of Battlesden House, a large nineteenth century house that was gradually demolished over the last few decades of the century. Only the ground floor remained at the time of World War 1, when it was used as a nursing home, before being demolished completely, leaving only a coach house and this drive.

This nature reserve is a reclaimed sand pit, parts of which had been filled with waste from an asphalt plant. The scrubby woodland and lichen heathland provides valuable habitats for birdlife, reptiles and orchids. This is one of a series of reserves in the former sand pits of the greensand region around Heath & Reach, managed by the Greensand Trust.

The church of St Mary the Virgin is the parish church of Old Linslade, a village of which little now exists. Linslade is now a large modern settlement around a mile to the south, around Leighton Buzzard station. The church on this site was originally a pilgrimage location, based on a now-lost holy well with supposed healing powers. In 1299, the Bishop of Lincoln banned pilgrimages to the well, on threat of excommunication.

This is part of the Grand Union Main Line, a 137-mile amalgamation of waterways that

links London with Birmingham, married together in the 1920s, demonstrating the importance that it retained as a commercial route well into the railway age. The corridor used by the canal up the Ouzel valley was subsequently used by Robert Stephenson to build the first London – Birmingham railway, now the West Coast Mainline to the northwest.

3 Responses to Woburn Abbey & the Greensands